"The Heaven's Declare" is a small ministry with the goal of bringing glory to the Creator by providing an exposition of the wonders of the universe. There is much to be learned about our Creator through the myriad patterns of design evident in the beautiful tapestry of the cosmos.

The Bible says the heavens declare "the glory of God" and "His righteousness". The universe proclaims His power and creative ability, as well as His appreciation for interesting variety and beauty.

Learn of some of the ways God reveals himself to us through the heavens by browsing the website, by attending a presentation, or by reading the book "The Celestial Message".

Hopefully you will find the site useful and can be refreshed by the beauty and glory of God evident in the universe.

The heavens declare the glory of God; and the firmament sheweth his handywork. (Psalm 19:1)

"The Heavens Declare" is a PowerPoint presentation that has been developed with the goal of bringing glory to the Creator by providing an exposition of the wonders of the universe. There is much to be learned about our Creator through the myriad patterns of design and creativity evident in the beautiful tapestry of the cosmos. A deep look into the universe uncovers a wealth of information that is relevant to God's people and inspires them to further faith in Him.

The presentation opens by building on a basis of a few things the Bible has to say about Astronomy, then moves on to explore the size of the stars and planets and then the size of the Universe itself, and finally, following up with some interesting observations of the planets and other objects in space. Photos, diagrams, and animations are used to help explain some of the difficult to understand aspects of the cosmos. Lots of dramatic photos of galaxies and nebulae are included, mostly from the Hubble Space Telescope. There are also scripture verses and inspirations relevant to the subject distributed through the presentation.

The aim is to help us see how we are such a small and seemingly insignificant part of God's creation, but yet He loves and cares enough about us to invest His life in ours. Also at the same time, we can get a glimpse of His glory, creative ability, and power as it's displayed in the Cosmos. The greatness of God is contrasted with human frailty, highlighting the significance of God’s love for us and the evil of our sinfulness.

The Creation reflects the power of its creator 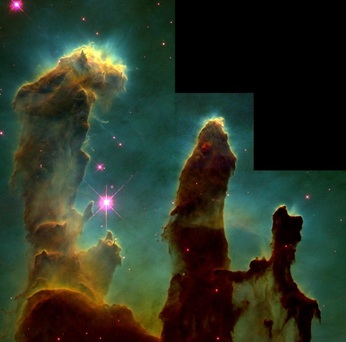 "Pillars of Creation" in the Eagle Nebula
Within the heart of the Eagle Nebula are several columns of dust that have been nicknamed the “Pillars of Creation”. These are just a small part of the Eagle Nebula. In fact, the entire cloud of gas stretches about 17 times farther through space than these pillars. This does not mean that they are small though. Here a close up photograph shows the three pillars at the heart of the Eagle nebula rising up into the open cavity. Even though it’s just a curling finger of dust in the nebula, the pillar on the left is a gigantic 4 light-years from the top to the bottom. It’s a distance so large, the feeble human mind is rendered almost useless in trying to comprehend it.

It would be easier to grasp this distance if a familiar object were placed next to the pillars for a sense of scale. One problem quickly becomes obvious; it’s next to impossible to find a familiar object to compare with these pillars. If we would take the entire Earth and place it next to this pillar at the proper scale, it would be too small to see. Since the Earth isn’t adequate we could try the Sun. The Sun is so large it could be filled with over one million Earths, but even if a circle the size of the Sun were placed on this picture it could not be seen. In fact, it would take over 27 million Suns stacked on top of each other to reach from the bottom to the top. Finally, since neither the Earth nor the Sun are adequate to compare with this colossal giant, we’ll compare it to the solar system, over five billion miles from one end to the other and 6,000 times larger than the Sun’s diameter. A ring the size of our solar system on this image would be smaller than one third of a pixel. The resolution of this picture would still not be good enough to properly show it!

If God’s simple dust is so utterly incomprehensible how much more inconceivable is He? He understandably asks the deep question “to whom then will ye liken me”?

The Creator's glory on display

Stretching all around us, across distances greater than the human imagination itself, are the Heavens that God has created. Each particular speck of light we see is bearing the witness of something far greater. From our perspective we see little more than flickering candles, weakly shimmering as if in the last moments of a fragile existence. But along with our newfound understanding of what they are, we have gained an insight into why they appear so frail, it is simply because they are set at an extreme distance, a safe distance from us.

These uncontrollable colossal giants of raging, roiling plasma are positioned trillions of miles from us for our own safety. We are situated just close enough for comfort to the nearest one of them; our sun. But even at this distance of almost 93 million miles, we shudder to think of what would happen should we be nudged just five percent closer. Venus, the next closest planet to the sun is only about 25 percent closer, yet has an average temperature of over 860 degrees because of its proximity to the sun and the thick blanket of sulfurous clouds.

Not only are these superpowers extremely energetic but also incredibly large. We could circle the sun once in a day if we traveled at the never before attained speed of 113 thousand miles per hour but if we made the same attempt at the same speed around the nearby star Betelgeuse, it would take over one and a half years to circle it. This of course will never be done because just to get to the star by traveling at that same speed would take 3.8 million years. Yet it is evident that comparing this distance to the known universe would be like focusing in on less than a single step in a marathon when looking at the grand scale of the cosmos.

In our galaxy alone there are approximately 100 billion stars. But our Milky Way Galaxy is reduced to an insignificant ember when viewed in light of the sea of galaxies across the far reaches of space. For every one of the stars in the Milky Way, we could find another entire galaxy of millions and billions more stars, with many of the stars possibly having planets in orbit around them. Across each galaxy He stretched a spectacular array of dramatic clouds of gas and dust called nebulae, which can extend trillions of miles through space. Scattered through this incredible spread of creativity are comets and asteroids, as well as strangely behaving and powerful quasars, magnetars, pulsars, and supernovas.

Because of these things we could ask; why the enormous size, why the dramatic display of power, and why the innumerable host of the heavens? The Creator has a purpose for everything He sets out to do. Is He trying to show us something?

The heavens declare many things, but one of the things is more of an invitation than a declaration. It is a call to worship the one who created the universe and all that's in it.