Size of the stars

Size of stars and planets relative to the earth

The object at the far right of each image will reappear at the left of the following image for a continuation of the scale. 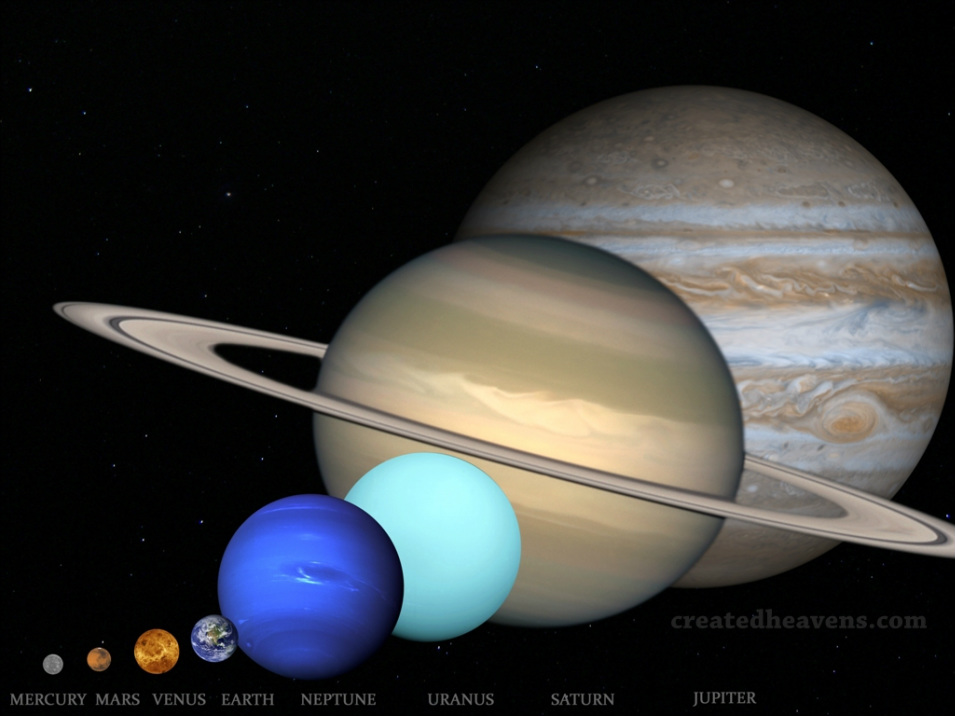 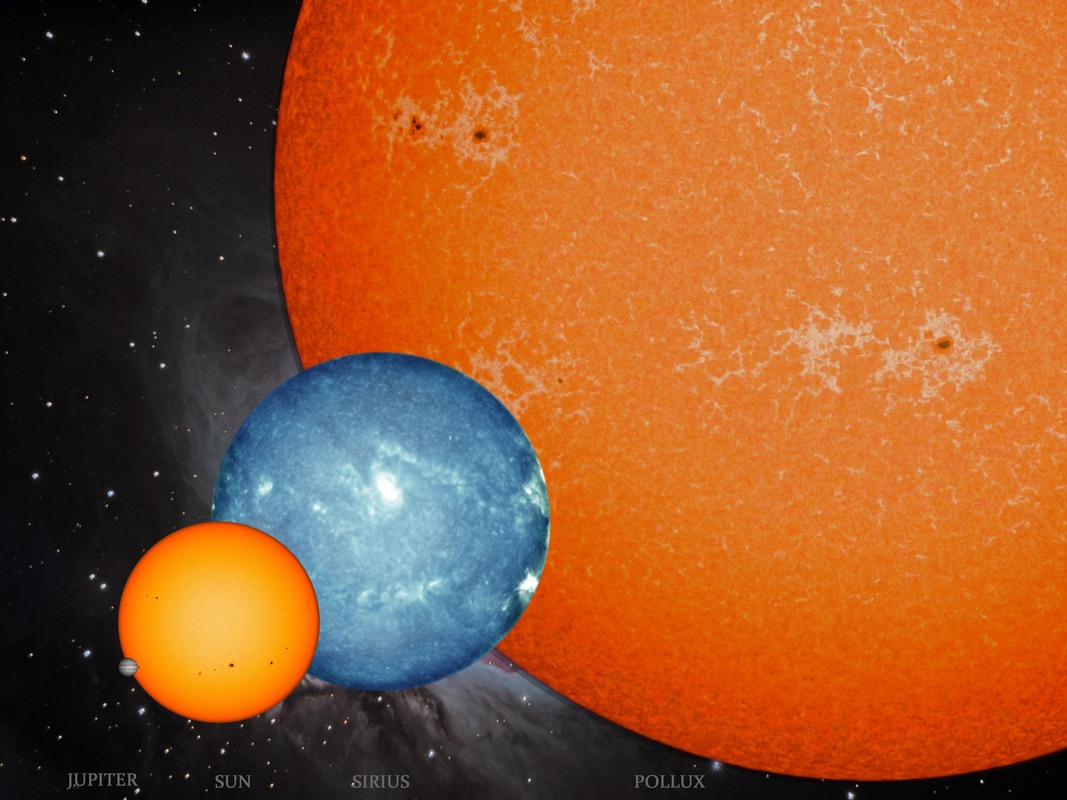 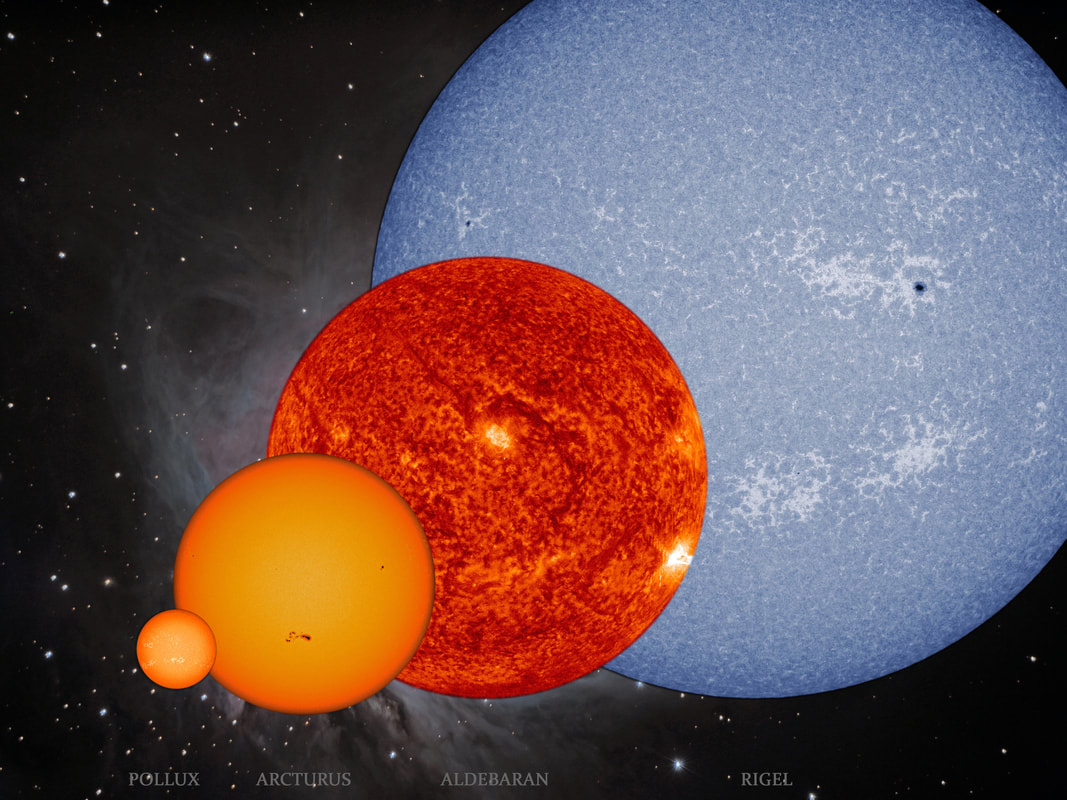 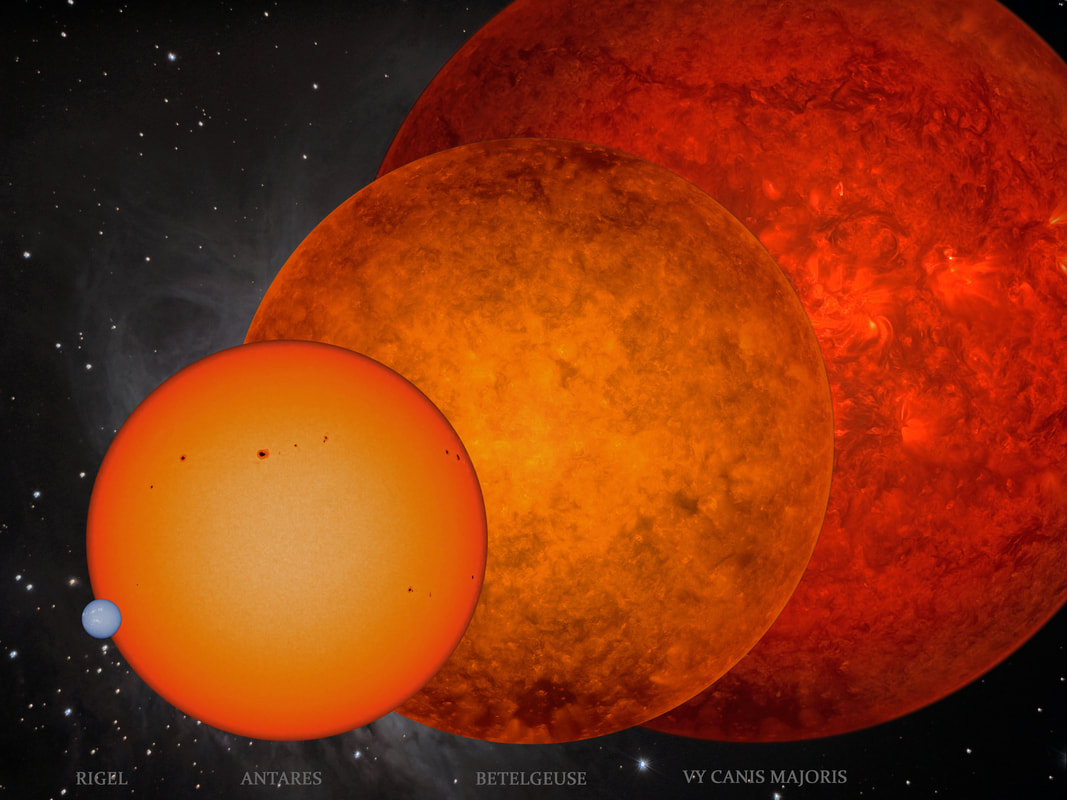 Mass of the stars 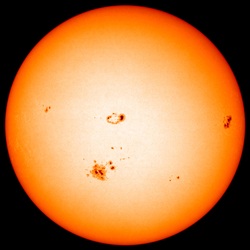 All stars are heavy but some are bloated like a hot air balloon on a summer day, while others are so burnt out (literally and figuratively) that they collapse under their own weight and are crushed down to extreme density (compactness). The range of densities of stars is enough to baffle anyone. Our Sun is at neither one of the extremes, not too light and not too heavy. In fact, it wouldn’t be hard to carry part of the Sun around in a bucket.
A one gallon bucket of water weighs a little over 8 pounds. We could dump the bucket out and fill it with dirt, it would then weigh about 10 pounds. If we dumped it out again and filled it with average density plasma from the sun, it would weigh almost 12 pounds, heavier than dirt but not nearly as heavy as iron. One gallon of iron would start to strain our bucket at 65 pounds. So solar material is not nearly as heavy as metal but there are stars other than the sun that are even much lighter yet. Many of the supergiant stars have their mass spread out over such a large area of space that something interesting would happen if we were to fill our bucket with material from these stars. After filling the bucket with supergiant star material the bucket would be lighter than it was before it was filled and would start to float directly up into the air! These stars are typically less dense than air itself.
The earth is the densest object in the solar system. Our one gallon bucket filled with average density earth would tip the scales at 46 pounds. By comparison, material from Saturn would weigh less than six pounds; this means Saturn is light enough to float on the ten pound water! Just because the earth is the heavyweight king of the solar system doesn’t mean that it can hold out against the competition from interstellar space. The nearest star to us after leaving the Sun is Proxima Centauri, a red dwarf that would weigh down our fragile bucket with over 450 pounds. Not very many people could pick up a bucket load like that.
We could double the distance and get to the nearest white dwarf, Sirius B, a clear winner in this super-dense category of stars. Our trusty bucket would fail miserably at this point. Pouring in a gallon of Sirius B would crush the bottom and burst out the sides as the 10 million pounds of plasma ran out across the ground. It would be impossible to clean up the mess; a teaspoonful of it would still weigh five tons!
White dwarfs seem like the very definition of heavy but they appear like downy fluff in comparison to a neutron star. One teaspoonful of neutron star material weighs in at one billion tons; equal to 500 million cars! This type of star has more mass overall than the Sun but is less than 10 miles across. If you haven’t guessed it, this star is the answer to the first riddle. Interestingly, it is the end result of the star that is the answer to the second riddle; a supergiant star. Supergiants are extremely unstable and can explode into a supernova; the remaining mass can then form a neutron star.
As if these mind crushing weights weren’t enough; we have the universe’s most mysterious objects: black holes. These are the most compact massive objects known; so dense they go beyond our understanding of density. Because of that, our spoon sits useless. We have no way of knowing how much the singularity of a black hole would weigh, or if it would even be big enough that we could scoop it up with our spoon!

Size  of  the  universe